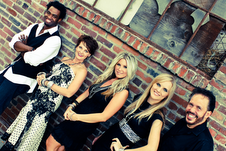 Tonja to join Christian Group Crosby Lane and they will debut the brand new group at The Diamond Awards and this year. SGNScoops announces the official debut performance of Christian Music’s newest group, Crosby Lane! Crosby Lane based out of Nashville and consists of five music veterans, Erin Johnston, Tonja Rose, Michaela Lindsey, John Lemonis, and E.J. Ford. The group CROSBY LANE is named for the most prolific hymn writer of all time, Fanny Crosby.  The music of CROSBY LANE is enthusiastic, and includes fresh arrangements of hymn classics and powerful renditions of praise and worship songs. It is about the music that has moved – and still moves – generations to worship the Lord!

Group member, John Lemonis adds, “Crosby Lane is absolutely thrilled to be debuting at the 2012 Diamond Awards! It is the perfect place for our first public performance. We are greatly indebted to all of the artists and fans who support Southern Gospel music! We look forward to being with you in person and have the deepest respect for everyone who makes and supports music that lifts the name of Jesus. We are honored to be in that number and can’t wait to see you all in Pigeon Forge!”